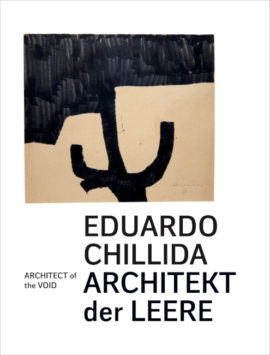 Eduardo Chillida is considered the most important Spanish sculptor of the second half of the 20th century.

His monumental, site-specific sculptures of steel, stone and concrete are now iconic pieces. They include, for example, the work ‘Peine del viento’ (Wind Comb) from 1976, mounted on three cliffs in his hometown San Sebastian and his steel sculpture ‘Berlin’ from 1999 which is situated in front of the Federal Chancellery in Berlin.

Taking in around 130 works, some of them large-format, the catalogue honours all the aspects and creative phases of Chillida’s oeuvre and accompanies the most comprehensive exhibition of his work in Germany to date.