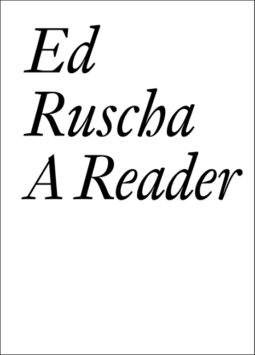 Since the mid-1960s, Ed Ruscha has developed an iconic body of works, simultaneously as a painter, a photographer (with such historical books as Twentysix Gasoline Stations, 1963), a filmmaker, and an acute commentator on American culture.

Born in 1937 and based in Los Angeles, Ruscha is a central figure of the last few decades and one of the first artists to have introduced a critique of popular culture and an examination of language into the visual arts.

Among the specific areas discussed and developed in this book are the artist’s early drawings, his relationship to literature and the Picture Generation, and the legacy of his artist’s book practice.

Figures close to the artist propose their own subjective readings of his work as a way to renew our understanding of it. The volume includes a previously unpublished text by the artist, and two portfolios of rarely seen work.

The book stems from an international symposium held in 2015 at the Centre Pompidou in Paris, and is part of the Documents series, co-published with Les presses du réel and dedicated to critical writing.

Published with the Centre Pompidou, Paris, and the Terra Foundation.