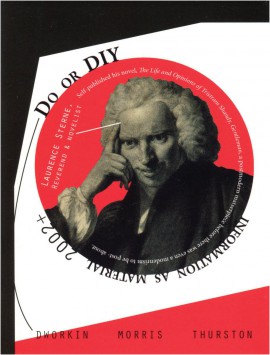 ‘Remember the lessons of literary history. Don’t wait for others to validate your ideas. Do it yourself.’

Mixing anecdote and advocacy, the first section of this two-part polemical essay offers an introduction to the concealed history of do-it-yourself publishing – as undertaken by some of the most revered writers in the modern Western literary canon, from Laurence Sterne (1713–1768) to Irma Rombauer (1882–1941) via Virginia Woolf (1871–1922) and Derek Walcott (1930–).

Having looked back at some of the monuments of literary history, the second section takes its charge from the epigraph, ‘Institutions cannot prevent what they cannot imagine’, and looks forward to the political praxis of the twenty-first century’s digital future.

The essay was first commissioned by the Foreword for the London Art Book Fair 2011 catalogue. Translations will soon be available in Spanish and Italian.

Limited edition. Do or DIY is created by Craig Dworkin, Simon Morris and Nick Thurston.