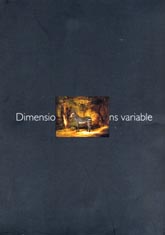 The title of this book and the choice of George Stubbs’s painting of a zebra on its cover points to one of the underlying preoccupations of the artists selected: the constantly shifting perspectives that new information, new technologies and new circumstances make evident. Dimensions Variable features recent purchases for the British Council Collection of works by a generation of artists who have come to prominence in the last decade. The works, each illustrated in full colour, represent a variety of approaches, concerns and means of realisation.

The influence of past movements in 20th Century art – particularly Conceptualism, but also Minimalism, Performance and Pop Art – are readily discerned in much of the work. Young British artists have received a great deal of attention in the past few years and have often been perceived as a coherent national grouping. However, in presenting these works together no new school or ‘ism’ is being suggested. While there are shared concerns in a number of their works, these are artists who also have a great deal in common with artists of their generation in many other countries. An illustrated biographical text on each artist is included in the book.