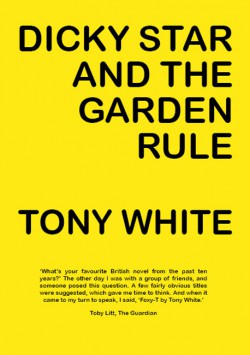 Dicky Star and the Garden Rule follows young couple Laura Morris and her boyfriend Jeremy through the turbulent days at the end of April 1986 when the world’s worst nuclear accident occurred at the Chernobyl nuclear power plant in the Ukrainian Soviet Socialist Republic of the former Soviet Union.

Jeremy and Laura’s story is told in vivid daily chapters that follow the unfolding disaster’s impact in the UK, but are also determined by their own quixotic puzzle: each chapter must be told using all of the answers to the Guardian Quick Crossword from that day in 1986.

Drawing on newspaper archives of the former independent left-wing weekly Leeds Other Paper and the then still broadsheet Guardian, Tony White creates an evocative story of mid-1980s life.

This book accompanies a touring exhibition of works by Jane and Louise Wilson entitled Atomgrad (Nature Abhors a Vacuum), commissioned in April 2010 as a response to the 25th anniversary of the Chernobyl disaster.

£5.00
Buy now
(Your order will be fulfilled by Ingram Publisher Services)