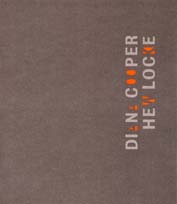 This catalogue has been published to accompany an exhibition of new commissions by Diana Cooper and Hew Lock at The Drawing Room, and marks the culmination of a partnership between The Drawing Room and the Centre for Drawing at Wimbledon School of Art.

Dr. Jon Wood’s essay examines in detail the working process of Cooper and Locke. Their tendency to use drawing to activate the divide between the second and third dimension is linked to the practice of their contemporaries and its historical legacy is unravelled.

Cooper was born in 1964 and lives in New York City. She has shown extensively in Europe and the United States, with solo exhibitions at Carl Berg Gallery, Los Angeles and Postmasters, New York, in 2005.