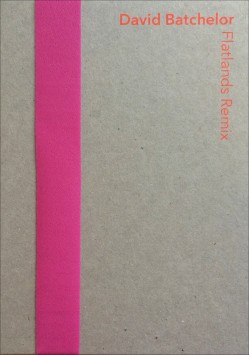 Flatlands Remix is part of the British Council’s International Touring Exhibitions programme. Selected and developed from David’s solo exhibition Flatlands (2013), which was guest-curated by Andrea Schlieker with The Fruitmarket Gallery, Edinburgh and Spike Island, Bristol, this exhibition explores Batchelor’s two-dimensional practice – an abiding and significant focus alongside his better-known sculptural output.

David Batchelor has held an important place in the British Council Collection from the first acquisition of his work in 2000 to the commission of the much-loved HK Fesdella light sculpture for their Hong Kong office in 2008.

His work has been included in some of their most successful and far-reaching exhibitions, including Multiplication, which toured extensively around South America and Europe from 2001–06, and Seeing in Colour, which was shown in Oman, Azerbaijan, Georgia, Ukraine and Armenia from 2010–11.

This publications is a unique, pocket-sized pad of 10 vibrant art postcards and an accompanying booklet featuring an exclusive interview with the artist. Consistently intelligent, playful and revealing, Batchelor’s work represents some of the best, and most colourful, British art being made today.

£7.99
Buy now
(Your order will be fulfilled by NBN International)