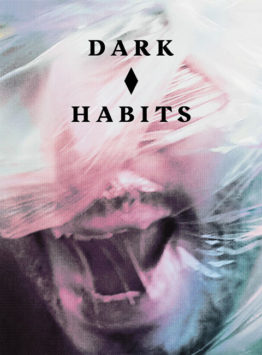 Dark Habits is the seventh publication from HOME Publishing since inception in 2015 to challenge and re-position the traditional exhibition catalogue as an artwork and commission in its own right, Dark Habits takes its inspiration from the classic Pedro Almodóvar film on the occasion of the group exhibition, La Movida at HOME, Manchester (14 April – 17 July 2017).

This pioneering contemporary visual art group exhibition, curated by Sarah Perks, takes the artistic and socio-cultural movement La movida (literally ‘the movement’) of post- Franco Spain as its thematic heart. Excess, clubbing, drugs, artistic freedom, gay rights, pornography and more all collided in an outpouring of freedom from suppression and a desire for making up on lost time in the early 80s in Madrid.

Nineteen contributors explore freedom and indulgence, hedonism, transgression, sex and moral conventions through short stories, poetry, essay, experimental writing and flash-fiction in this standalone alternative to a rigid exhibition catalogue and the latest in the exploratory HOME publishing stable.

** In 2017, we cannot believe that a printer refused to print this book, labelling it ‘obscene’. It’s ironic as the whole La Movida project was supposed to be a reminder of less progressive times and celebrating 40 years since the abolition of censorship. Decide for yourself.

Dark Habits was launched on 23 June 2017 at the International Anthony Burgess Foundation in Manchester.

£12.99
Buy now
(Your order will be fulfilled by Ingram Publisher Services)