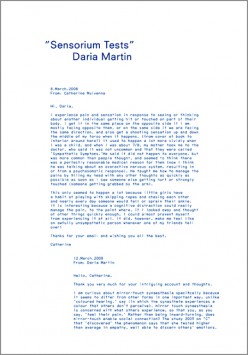 This monograph revolves around Daria Martin’s new film Sensorium Tests, 2011, which uses the recently recognized neurological condition of mirror-touch synaesthesia to explore how sensations are transmitted, shared, and created in film, raising the question: Can a spectator feel a bodily reaction to film?

Exploring the spectrum that lies between sight and touch, the publication includes key texts selected by Martin into such pressing issues, which are also related to voyeurism and projection, artificial intelligence, and magic, from a host of leading writers and thinkers from Mary Shelley to Wayne Koestenbaum, via Maurice Merleau-Ponty, Rainer-Werner Fassbinder, and Laura Mulvey.

Martin’s introduction to this section addresses subjects such as mirroring, paralysis, and animism, asking such far-reaching questions as how empathy and desire, identification and lust are related. Daria Martin was born in San Francisco in 1973 and currently lives in London. Her films have been screened in many international venues, including Tate Modern, Tate Britain, the Royal College of Art, the Vienna Secession, and Arnolfini, Bristol.