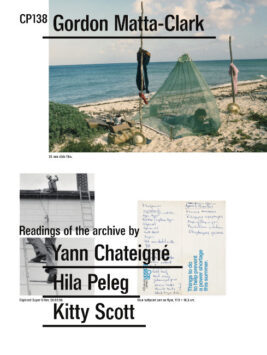 He began executing building interventions in 1971 when he cut walls in a loft in New York City to create Sauna (1971) and at the Museo de Bellas Artes in Santiago where he made an untitled wall cutting (1971).

Throughout the following years of his major building cuts, Matta- Clark continued to explore other aspects of cities and their structures.

This book unpacks the comprehensive Gordon Matta-Clark collection at the CCA Montréal, opening it up to provisional readings from different points of view.

Yann Chateigné reorganizes Matta- Clark’s library into areas of inquiry, from alchemy to psychoanalysis, as a framework for gathering traces— written and drawn—of his thinking.

Published on the occasion of the exhibition at the Canadian Centre for Architecture, Montréal, 6 June 2019 – 2 August 2020.