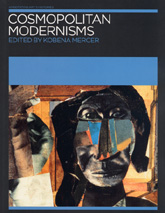 Cosmopolitan Modernisms explores various moments in 20th century art where the encounter between different cultures has produced something distinctive and revealing about the lived experience of modernity. Travelling through a variety of historical contexts, from colonial India and pre-war Germany, to post-1945 Brazil, and the Caribbean and African-American spaces of the black Atlantic diaspora, this unique collection re-defines the ‘cosmopolitan’ as a critical aspect of the questioning attitude that artists adopted throughout the world.

Featuring internationally respected scholars at the cutting edge of contemporary research, Cosmopolitan Modernisms is the first volume in the Annotating Art’s History series. Other titles in the series are Discrepant Abstractions, Pop Art and Vernacular Cultures and Exiles, Diasporas & Strangers.