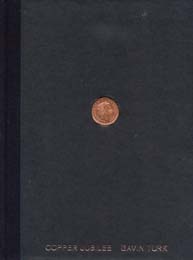 Copper Jubilee has been published to accompany Gavin Turk’s solo exhibition at The New Art Gallery Walsall in 2002. The exhibition includes several new works including sculpture, photography, drawings and watercolours.

The book includes an essay by Deborah Robinson who comments on the Copper Jubilee exhibition in the context of the artist’s career to date, and an essay by Turk’s Studio Assistant, Esther Lane, on Turk’s studio practice, which is illustrated by photographs of work in progress.

Four Seasons with Gavin, a text by Mary McCaughey, consists of four short vignettes of Turk’s ‘interactions’ with the art world, and a dialogue between the artist and Don Brown covers issues of portraiture.

This book is lavishly illustrated with photographs by Stephen White and has been designed by Tim Barnes of chicken.