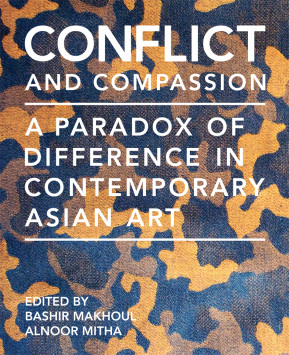 Conflict is avoidable. However, this is often recognized only  in retrospect and sometimes because of the high cost of conflict. Many situations of conflict in Asia – past and present − seem to consist of opposed groups for whom conflict has become an unavoidable obsession.

This book is part of the Asia Triennial Manchester 2014 symposium, which was held at the Imperial War Museum North on 20 November 2014.

The authors discuss the arts and contemporary artists who produce works that entail both innovation and allusion to conflict in the pan-Asian world.

The essays in this book demonstrate how conflict and compassion are ‘in’ these works – in markedly different (even antagonistic) ways: the forms and the contents are bound up together, often in specific works that themselves contain antagonisms of identity, identification, difference and meaning.

Bashir Makhoul is Deputy Vice-Chancellor at Birmingham City University and Professor in Art and Design. He is author of Return in Conflict, Palestinian Video Art.

£29.99
Buy now
(Your order will be fulfilled by Ingram Publisher Services)