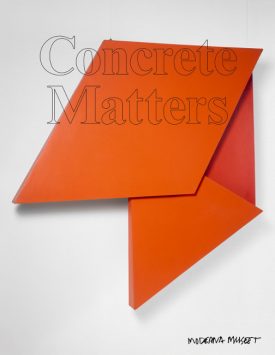 During a few decades characterised by social change, optimism and dramatic political events, artists in the fast-growing cosmopolitan Latin American cities of Montevideo, Buenos Aires, São Paulo, Rio de Janeiro and Caracas adopted and developed a new, concrete language that distanced itself from either figurative or representative imagery.

Concrete Matters presents some 70 works from the mid-1930s to the 1970s by artists who explored the potential and boundaries of concretism in various ways, and with partly different intentions.

It highlights the Brazilian neo-concrete movement, with artists such as Lygia Clark, Willys de Castro, and Helió Oiticica, all who radically changed the notion of the work of art as a static object in the late 1950s.

The selection is formed around works from the Colección Patricia Phelps de Cisneros.

Published on the occasion of the exhibition, Concrete Matters at Moderna Museet, Stockholm (24 February – 13 May 2018).