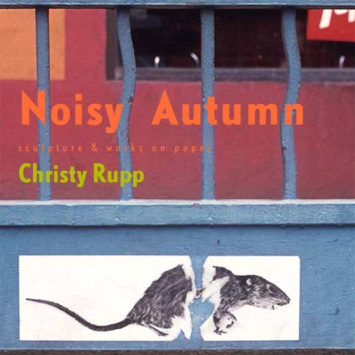 “This book displays the extraordinary variety of Rupp’s work over the years and the increasing urgency of her wide-ranging concentration on the cultural framing of nature, from Disney to scientific literature to the Hudson River School…” – Lucy R. Lippard

Christy Rupp (b.1949) is an influential New York-based artist and activist. This seminal publication reflects on her art practice across five decades, from the 1970s to present. It is curated around six chapters which cover themes of Climate, Habitat, Economics, Resource Extraction, Water and War.

Often informed by scientific research, Rupp’s art is inspired by the study of animal behaviour. She is one of a group of pioneering American eco-artists concerned with urban ecology and our perceptions of nature. In her recent work, urgent environmental messages are elegantly (and usually with a wry irony) communicated through pieces such as recycled metal skeleton sculptures of endangered animal, bird and insect species; and paper collages exposing the corruption and dangers of the fossil fuels industry.

Frequently associated with Urban Art in New York of the 1980s, the artist’s first publicly visible work was ‘The Rat Patrol’ – an outdoor poster project of a life-size rat pasted where (during the Sanitation Strike) garbage accumulated, pointing out the fact that New York City is a living ecosystem with a delicate balance.

In January of 1980, Rupp was one of the artists who illegally occupied an abandoned city-owned building in Manhattan to create the ground-breaking, ‘Real Estate Show’. Later in the summer of that year, she participated in the iconic ‘Times Square Show’. Her infamous ‘rats’ (pasted across the city) could be seen alongside work by fellow NYC artists including Jenny Holzer, Keith Haring, and Jean-Michel Basquiat.

As a resident of lower Manhattan in the late 1970s Rupp exhibited in influential early artist-run spaces such as Exit Art, Franklin Furnace, and The Kitchen. She was deeply involved in the explosion of late 1970s artist generated activity which included Collaborative Projects (Colab) and Group Material.

£25.00
Coming soon
(subscribe to our newsletter be the first to know when this title is available)