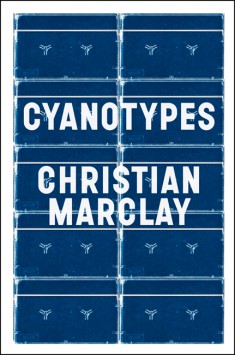 Known as the inventor of ‘turntablism’, Marclay has explored the relationship between visual and sonic phenomena through his work in diverse media.

In the cyanotypes, he reclaims the obsolete technology of the audio cassette as a tool for visual abstraction. First developed in the 1840s, the cyanotype is a camera-less photographic process performed by placing objects directly onto a photosensitive surface, resulting in a silhouetted image.

Commonly known as ‘blueprints’, cyanotypes were famously used by nineteenth century botanist Anna Atkins and later by architects and engineers as a way of reproducing drawings.

Marclay’s cyanotypes capture the abstract tangles made by unspooled cassette tapes, inviting comparisons with the paintings of Jackson Pollock and other twentieth century artists.

Designed by Swiss design firm NORM in collaboration with the artist, this volume includes a study of Marclay’s experimentation and utilization of the cyanotype process and its broader contextualization with the history of the avant-garde by scholar Noam Elcott.