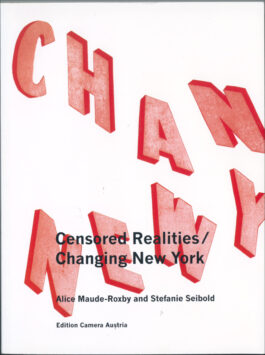 Alice Maude-Roxby and Stefanie Seibold collaborated on an investigation of Changing New York (1939), by photographer, Abbott, and her long-term partner, art critic and writer, McCausland. They discovered McCausland’s original texts in the archives of the Museum of the City of New York, and saw that they were dramatically different to those that she was finally credited for in the various editions of the book.

Alice Maude-Roxby and Stefanie Seibold worked to produce their own book Censored Realities/Changing New York through which they have put back into circulation the original McCausland texts that had originally been rejected, censored and edited right down in the final publication of Changing New York in 1939.