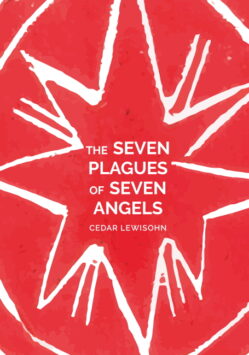 ‘And one of the elders saith unto me, Weep not: behold, the Lion of the tribe of Judah, the Root of David, hath prevailed to open the book, and to loose the seven seals thereof.’ (Revelations 5:5)

The Seven Plagues of Seven Angels follows The Marduk Prophecy (2020) as Cedar Lewisohn’s second project for Slimvolume. If the publication’s title is a direct reference to the Book of Revelations – a biblical premonition of an end of time where numerous pestilences curse the earth – then Lewisohn translates this story into an intense contemporary allegory where pandemics, environmental catastrophe, an ongoing threat of nuclear Armageddon, and unmitigated multi-faceted apocalypse prevail.

Fascinated with the absolute strangeness of the Bible’s Bosch-like descriptions of characters covered in loathsome soars, alien lifeforms such as beasts with seven-heads and events that include those that describe the sea turning to blood, Lewisohn’s ‘primitive’ images – taken from reference points including African and Mesopotamian civilisations – are translated into an equally eerie image-led wordless comic book through the use of handmade woodcuts and lino prints.

Depicted in red and white, the traditional colours of protest and anarchy, these oddities act as provocative representations that blur the line between human and otherworldly creatures. In essence, this work connects with contemporary culture and identity through depictions of people in states of psychosis in present-day London.

The Seven Plagues also holds a connection with reggae music, and with the fall of Babylon’s tropes of captivity, power structures, corrupt governments and unethical institutions seen in rebellion against the will of Jah (God).

Importantly, the Book of Revelations was originally written in Aramaic before moving to infect the wider world with its Christian message. Similarly, Rastafarian culture and Jamaican patois has become widely diffused, and continues to inform ideas around displacement, alienation, protest, liberation and redemption.