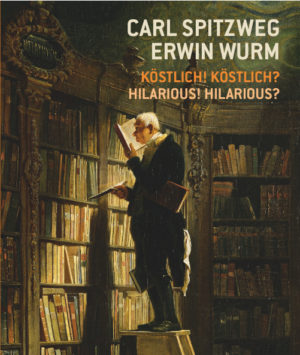 Carl Spitzwegʼs work is often closely associated with the definitions of tranquillity and the petit bourgeois idyll connected with the Biedermeier period (1815 – 1848) during which the middle class grew and arts appealed to common sensibilities. In order to correct the image, this catalogue focuses specifically — not least by including historical, social and political implications — on the work that is critical of society.

Spitzweg was a critical commentator, who documented the fractures and conflicts of his time as an attentive observer. The topicality of his themes, as they are found again in the twenty-first-century Generation Neo-Biedermeier, become clear through analysis, and can be demonstrated by Erwin Wurmʼs precisely placed interventions.

Wurmʼs work also refers to various facets of poetry and the idyll, of humour and (self) irony and is peppered with political and cultural-analytical innuendos. Their oeuvres are linked by a critical and reflective humour, which shows everyday life from other perspectives and thus evokes manifold dimensions.

This is the first comprehensive exhibition in Austria on German artist Carl Spitzweg. His works are complemented by precisely placed cultural-analytical works created by the Austrian sculptor and photographic artist Erwin Wurm.