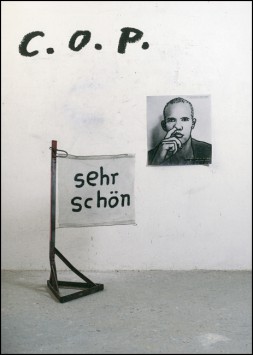 This retrospective catalogue shows many of the artist’s works from all of his creative periods, including his legendary ‘Umrandungen’ (borders or outlines), which have become a kind of trademark for C.O. Paeffgen since the 1980s, as well as some of his large-format wall and floor sculptures from the ‘Umwicklungen’ (wrappings) work series, in which wire is wound around countless everyday found objects.

A selection of his ‘object-crates’ is also presented: lapidary fruit and vegetable crates, which rise to the position of multiform ‘objects in colour’. Motifs typical of the artist’s work, such as the question mark, the heart, the arrow, the mouse, the bow and the moon reappear again and again in very diverse contexts.

His contemporaries confronted Paeffgen with ironic comments; his art is sensitive, caring and not at all cynical. It’s about life, which he furnishes with narratives, without any moral or didactic intent.

Published on the occasion of the exhibition at Arp Museum Bahnhof Rolandseck, 22 March – 1 September 2013.