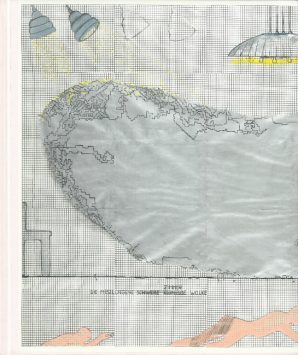 Bruno Gironcoli gained public recognition with the large-scale sculptures he began exhibiting in the mid-1980s, in which archetypes and trivial elements meld to form futuristic conglomerates. Yet his career started much earlier, in the 1960s, when Gironcoli, aware of international trends in art, developed his own radical and independent perspective.

It is less well known that alongside his work in sculpture, Gironcoli also produced an extensive body of graphic works. Right from the beginning, these often large-format pieces, which became more and more painterly over the years, were not just mere sketches for sculptures. Working on paper, the Austrian artist instead took his own spatial ideas into dimensions that by far transcend any concrete work on physical materials.

On paper, Gironcoli animates his own sculptural work: divorced from real sizes and dimensions, as well as from the laws of physics and the limits of bodies, his schematic figures, animals, symbols, and apparatuses enter into hypothetical connections. They merge to form fantastic and surreal constellations and scenes.

This catalogue is the hitherto most comprehensive publication on Gironcoli’s works on paper.