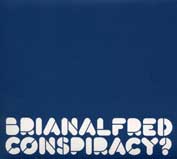 Brian Alfred (born in Pittsburgh in 1973 and now living and working in New York) is an emerging artist known for his works that engage with the nature of contemporary society dominated by digital media. He graduated from Yale University in 1999 and has since had solo shows in New York, Los Angeles and Arizona.

This audio CD has been produced to accompany Alfred’s first solo exhibition in the UK (Haunch of Venison, London, March – April 2005) and presents paintings, collages and video animation that refer to some of the many different corporate and government conspiracy theories that circulate throughout our information-saturated culture. The CD features electronic music specially produced and written by Opiate (Thomas Knak) from the digital animation Conspiracy, 2004. It enhances the mood created by the images in the animation. Included with the CD is a 12 page booklet featuring an essay by Brian Alfred and Tom Morton.