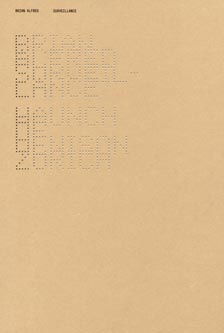 Published to accompany Brian Alfred’s exhibition at Haunch of Venison, Zürich, Surveillance features 22 collages, 5 paintings and an installation, including a four screen animation, probing the concept of surveillance.

Brian Alfred (born in Pittsburgh in 1973 and now living and working in New York) is an emerging artist known for his works that engage with the nature of contemporary society dominated by digital media. He graduated from Yale University in 1999 and has since had solo shows in London, Zurich, New York, Los Angeles and Arizona.

Included is an interview by Nigel Warburton.