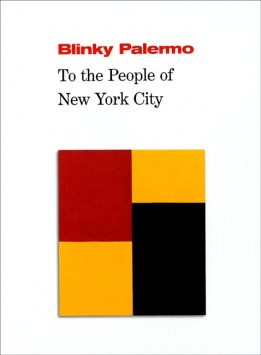 The painter Blinky Palermo (1943 – 1977) worked on his last great work cycle between 1974 and 1977 in New York, where since 1973 he had been staying from time to time and in 1975 had set up a studio there. Palermo dedicated this cycle conceived as a series To the People of New York.

These reduced, purist paintings on 40 aluminium panels were built up on the colour triad of cadmium red, yellow and black, in variations of 15 linked movements and seven different formats.

They not only recall Mondrian’s late picture series New York City (1941-42), but also the paintings of American artists such as Robert Ryman, whose series, line-ups and repetitions were decisive, independent of the motifs or any similar thematic or formal raisond’être.

In this same way the prescribed hanging, the rhythmically changing formats and inbetween-spaces of To the People of New York remind us of musical scores that the jazz lover Palermo very intensively experienced in the New Yorker scene.

The series To the People of New York can be found today in the Dia Art Foundation, New York, where it was shown in 1987 – 1988, parallel to works by his former teacher Jospeh Beuys and his colleague Imi Knoebel.