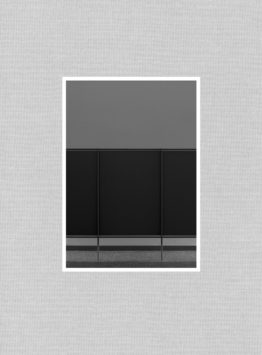 Swiss photographer, sculptor and installation artist Bernard VoÏta, who was born in 1960, sees the camera not simply as a tool, but rather as a motif that appears time and again in his works.

The artist addresses space, surface and illusion. His technically brilliant photos play with the ideas of model and reality and reality and fiction. In his images, which are arranged from everyday objects in his studio and then shot in analog form, there is an interplay between two- and three-dimensionality that takes shape in the atmospheric light and dark.

The exhibition at the Kunstmuseum Solothurn was compiled and arranged by Bernard VoÏta as a complete composition. Using replicas and photographs of his work, the artist works with various levels of reality.

The text and illustration section of the catalogue comes after room shots taken several months before the exhibition started and where the actual metal sculptures are simulated by cardboard models.