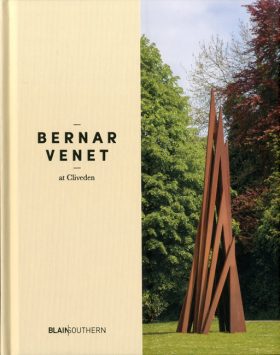 Published on the occasion of Bernar Venet at Cliveden, an outdoor exhibition of Venet’s sculptures at the National Trust property in Buckinghamshire – this Blain|Southern publication features Jonty Wilde’s beautiful photography of Venet’s work installed in these remarkable surroundings.

Many consider Bernar Venet to be the world’s greatest living French sculptor. Venet (b.1941) rose to prominence in the late sixties through the avant-garde art scene in New York. He moved to the city in 1966 and quickly became instrumental in developing a radical new proposition involving the use of mathematics and scientific language.

His work has been exhibited all over the world in galleries as well as public and historic spaces such as the Palace of Versailles, MoMA New York, the Champ du Mars beneath the Eiffel Tower and many other renowned locations. This significant installation marks the first outdoor exhibition of Venet’s work in the UK since 1976.

Bernar Venet at Cliveden runs at the National Trust property, 9 May – 15 October 2017. This publication of this book also coincides with an exhibition, Bernar Venet: Looking Forward 1961 – 1984 at Blain/Southern, in Summer 2017.