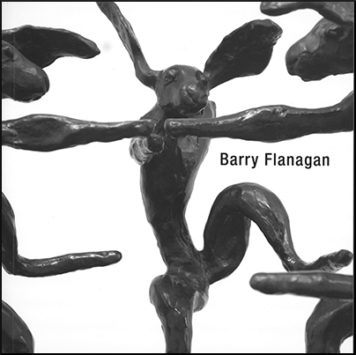 Barry Flanagan (1941–2009) was one of Britain’s pre-eminent sculptors, best known for his dynamic bronze hares.

He graduated from St Martin’s School of Art in 1966 where he had already established his reputation as a leading figure of the British avant-garde. He soon received international critical acclaim for his intuitive and inventive approach to materials, which aligned him with the emergent art movements of Arte Povera, Land Art and Process Art.

This major survey brings together a selection of Flanagan’s bronze sculptures (1980s–90s) alongside earlier works, offering new insights into the interconnectedness of seemingly distinct aspects of his practice.

Demonstrating an ongoing experimentation with materials and their properties, and a symbiosis between abstraction and figuration, his art represents the distillation of a fascination with ontology, movement and material physicality.

For Flanagan, sculpture was as much performance (with sound and light) as it was bronze and carving. The exposure of process and method is something he consistently performed in every medium he used throughout his career.

He frequently used casts of objects as components in sculptures and allowed bits of the armature to show through stripes of clay or plaster, thereby exposing and recording the processes of its making. The durational nature of Flanagan’s films is translated into the bronzes, as we bear witness to the processes of casting.

Published on the occasion of the exhibition, Barry Flanagan at Ikon Gallery, Birmingham (18 September — 24 November 2019).