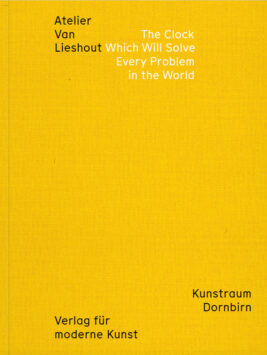 The Atelier Van Lieshout was founded by the sculptor, painter and visionary Joep Van Lieshout in 1995. After graduating from the Rotterdam Art Academy, Van Lieshout quickly became known for projects that can be situated in the inbetween area of applied design and the non-functional artistic realm.

Atelier Van Lieshout works in the disciplines of installation, sculpture, architecture and happenings. Its interdisciplinary practice consists in dismantling and redefining systems in social, political and economic contexts, and in the human body. The boundaries between art, design and architecture are thereby constantly being crossed and the intersections between function and fiction, destruction and creation explored.

The centre of the accompanying show at Kunstraum Dornbirn (4 September  – 8 November 2020) is the monumental work “Pendulum”, an oversized, ticking mechanical clock that reflects the irrevocable passage of time and thus our own lifetimes. In direct connection with it, other machine-like works perform their labour of change and destruction.