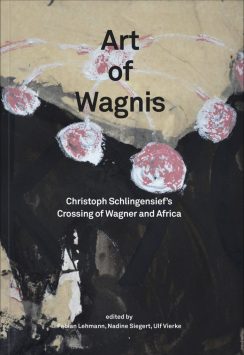 In the oeuvre of filmmaker, theatre director and action artist Christoph Schlingensief (1960–2010) two topics are particularly important: the myth of Richard Wagner and the image of Africa.

Schlingensief not only address both topics in parallel, however, he confronted them in unknown ways. He arranged a Wagner Rallye (1999) through the deserts of Namibia, exposed the African in Wagner’s opera Parsifal at the Bayreuth Festival (2005–2009).

Towards the end of his life, he started to realize his vision of the African Opera Village (ongoing). By now fleeing the Wagner cult in Germany, he aimed at an institutionally liberated opera in Burkina Faso. But what does it mean to dislocate and negotiate opera within the context of Africa?

This publication comprises essays, artistic contributions and interviews with contemporaries that approach Schlingensief’s work from different disciplinary perspectives, allowing us to see behind his projects and ideas and provide artistic responses.

The triangle, Schlingensief – Wagner – Africa is thus activated in different constellations and offers fresh insights into the oeuvre of the contemporary German artist.

£36.00
Buy now
(Your order will be fulfilled by Ingram Publisher Services)