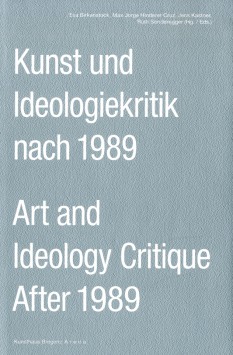 This third volume in the series of KUB Arena publications gathers introductory texts, essays, and interviews on the thematic relationship between ‘Art and Ideology Critique  After 1989’.

The volume is comprised purely of textand  aims to achieve both an autonomous contribution to ideological research as well as to sensitise readers to differing practices of critiques of ideology in the field of contemporary art.

Using the ‘ideological-theoretical turn’ of the 1960s as its point of departure, the first part of the book under the title Genealogical Constellations develops a ‘historical-systematic’ approach to historical and current critiques of ideology.

The second part focusing on Temporal Diagnoses addresses the conjunction of specific ideological-theoretical inquiries with current developments in the field of art today.