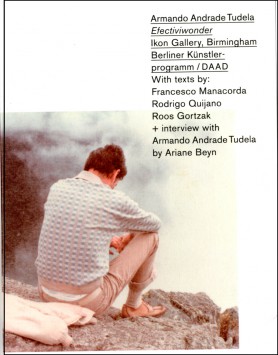 Armando Andrade Tudela works across a range of media, tracing the flow of objects, images and materials between different aspects of culture such as architecture, social or political movements and history.

Born in Lima, Andrade Tudela trained first in his native Peru and then later at the Royal College of Art, London and the Jan Van Eyck Academy, Maastricht. This experience, of moving between the influences and artistic cultures of Latin America and Europe was formative to his practice.

By treating found imagery as recovered fragments that, if reconfigured, might open up new ideas across history and geography, Andrade Tudela creates a process he calls ‘retroactive deprogramming’; using traces of the past to allow new, imaginative possibilities for the future.

This catalogue, published after his exhibition at Ikon (in 2009), consists of new work that extends Andrade Tudela’s interest in materials, value, scale and the relationships between them. A number of sculptures derived from minimalist objects, are made from rattan.

The weave of this material, layer on layer, produces a psychedelic effect that is characteristic of how the artist employs repetition, rhythm and colour in order to suggest a hallucinatory way of seeing. Thus the artist signals his interest in the possibilities of transforming human perception, making strong reference to sixties counter-culture.

£13.99
Buy now
(Your order will be fulfilled by Ingram Publisher Services)