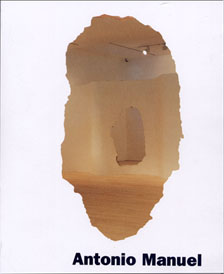 Antonio Manuel is a catalogue of the work of Brazilian artist Antonio Manuel, following an exhibition of his work Occupations / Discoveries in 2005 at Pharos Centre for Contemporary Art, Nicosia, Cyprus. Antonio Manuel lives and works in Rio de Janeiro.

He began his work as an artist during the 1960s when he became acquainted with key figures of the Brazilian art scene such as the critic Mário Pedrosa, and artists Lygia Clark, Hélio Oiticica, Lygia Pape and Ivan Serpa. He developed a posture that expanded the limits of art practice, increasingly focusing on the body as a vehicle for his propositions.

Partly as a consequence of the socio-political environment, partly as a creative strategy, he has worked in the interstices of cultural dissemination appropriating imagery and sometimes the actual circuits of circulation of mass communication.

Sensationalist newspaper headlines, censorship, the displacement of marginalized populations, crime and police brutality have featured in Antonio Manuel’s oeuvre, tracing the upheavals of Brazilian history over the last forty years.