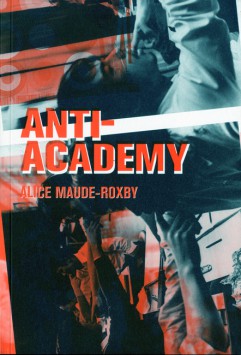 This publication focuses on experiments in Fine Art education of the 1960s through the teaching and workshops of ‘radical’ artists known in the fields of performance, fine art, installation, film-making and publishing. Including the workshop diagrams, notes, interviews and documentation of workshops by Hi Red Center, Vito Acconci, Elaine Summers, Mary Beth Edelson, Poul Gernes and the collective artists of Ex-School amongst others.

Comprised of three sections, each relating to one of these school’s programmes, Anti-Academy explores life at Bigakko, Tokyo that was founded by radical publishing company Gendaischisho sha, The Intermedia Programme at the University of Iowa founded by artist Hans Breder, and Ex-School, Copenhagen instigated by Poul Gernes and Malevich scholar Troels Andersen. The publication includes interviews with the artists and their students and contextual essays by Yoshiko Shimada, Jessica Santone, William Marroti, Alice Maude-Robxy and Tania Orum.

Anti-Academy is a comprehensive interpretation of how these three academies situated themselves on the peripheries of the art world, existing in opposition to the mainstream, and responding to the political and social climate, location and cultural context of the day. Notable students of these programmes included Ana Mendieta, Bjoern Norgaard, Per Kirkeby and others and the legacy of these experiments in art education can be seen as influential on the wider developments in fine art practice, and have currency within reviews of art education taking place today.