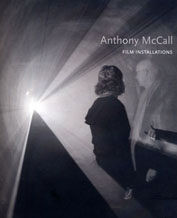 Shown for the first time in Stockholm later that year McCall’s film is an extraordinarily sensual meditation upon the medium of film and the politics of the audience’s physical and conceptual relationship with it.

This is the first comprehensive volume to document and reassess McCall’s work, placing it within a wider art historical and social context.

Essays by George Baker and Lisa Le Feuvre examine the works relevance for contemporary art production and offer a range of critical approaches to these astonishingly individual film works. A text by the artist himself provides a clear outline of his working methods and the history of his earlier works.

Published to accompany the exhibition, Anthony McCall at the Mead Gallery, University of Warwick, 21 April – 20 May 2004.