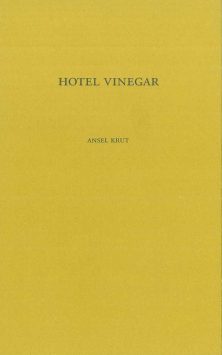 A Pocket Book for Ansel Krut’s solo exhibition Hotel Vinegar at domobaal in 2006 with an essay by Martin Herbert and a story by Miles Johnson.

“Ansel Krut’s paintings often feel like propositions regarding the medium’s capacity for building energy from multifariousness. ‘Testicles with Moustache’, for example, is a dense simultaneity of displacements: the apparent subject of a pinwheel-eyed, behatted head rising over a wall—or an ocean—of scuffed paint, is soon made unsteady. Cheeks and lips, you realize, do double-duty as thighs and booted calves; the nose is a pendulous pair of testicles, and so on. But this physical doubling, extending onto gender (and riding on deceptively rough-looking handling that enfolds a delicate touch), subtends an emotional one. The pictured subject’s beleaguered emotional state won’t hold, so indecorously extreme is it—it wants to flip over into some sort of joke. The pervasive instability won’t let that reading dominate either; not will the content settle. A painterly recasting of the famous duck/rabbit image, it’s a portrait of selfhood constantly collapsing into its other, enabled by the fluid permissions of paint.” Martin Herbert, June 2006