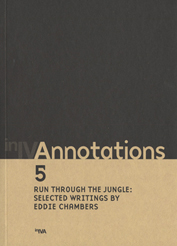 The fifth volume of inIVA’s popular, affordable Annotations series , Run Through the Jungle is a collection of writings by Eddie Chambers, one of Britain’s most controversial critics and curators. As artist, curator, archivist and critic he has maintained his position as one of the most uncompromising voices of the art establishment. A selection of his writings from the mid-1980s to the present day is published here for the first time, and includes seminal texts and reviews such as Beyond Ethnic Arts (circa, 1985), Black Art Now (Third Text, 1991), Whitewash (Art Monthly, 1997) and Johannesburg (Art Monthly, 1998).

This collection maps out a key period of post-war British art that saw the emergence of an important generation of black artists and curators who irrevocably changed the face of the British art scene. Eddie Chambers is a regular contributor to Art Monthly and an magazine, among other art journals, and has curated a number of important exhibitions including Black Art: Plotting the Course (1988), History and Identity: Seven Painters (1991), Black People and the British Flag (1993), Bowling on Through the Century (1996) and Mildred Howard: In the Line of Fire (1999). He lives and works in Bristol.

£4.95
Buy now
(Your order will be fulfilled by Ingram Publisher Services)