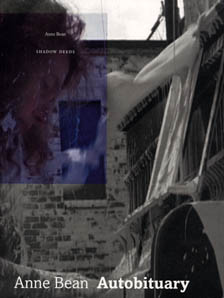 Autobituary is a visually rich book of images from Anne Bean’s original performances 1969 –1973 and photographs of her subsequent re-staging of those performances made during 2005. It will be a book within a book, comparing two sets of photographic ‘evidence’ from two almost identical sets of performances made years apart.

Anne Bean has initiated and participated in numerous collaborative projects, solo performances and installations, including a banquet for Chancellor Schmidt and Henry Kissinger in Bonn as a representative of British radical theatre; working in a derelict house with Paul McCarthy and Paul Burwell in East London; performing in Punk Clubs in Hollywood; and as part of William Burroughs’ Final Academy. Anne Bean was awarded the Time Out Dance and Performance Award for her long-standing contribution to live arts.

Includes a DVD of her Shadow Deeds performances.