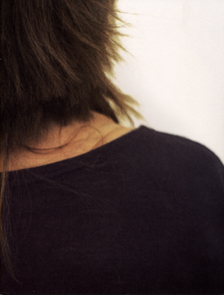 Over the last five years, the German artist Anja Schrey has primarily focused on larger-than-life self-portraits made in coloured pencil. Working with meticulous precision, Schrey produces compelling figures which, set against white backgrounds, come across as alien in their separateness. The artists deliberately conceals her individuality behind an array of poses: her gestures revealing the gender attributions born of society and boosted by the media. Even when her face is shown front-on or in profile it is impossible to discern either mood or emotion. This conscious indifference keeps the viewer at a distance – despite the fascination of the figure’s tactile presence.

A variety of sources and derivations are present in Schrey’s figures: media images, gestures from her performances, and stagings of the model in her studio, which the artist gives concrete form in a photographic image before committing to paper. For Schrey the process of drawing is a tool for both communicating with and distancing herself from the object of her work. Before she ‘re-presents’ it to her audience, she submits it to clarifying scrutiny.