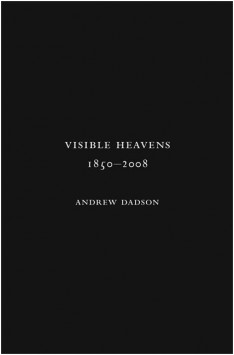 Vancouver artist Andrew Dadson has based his book around a star map from 1850. The original map was photocopied, and each subsequent copy was re-photocopied.

The slow degradation of the image marks the cultural shift within our interpretation of the stars (constellation charts were called maps of the heavens but after 1975 they became known as maps of the sky) and each photocopy represents a year in the decline from ‘heaven to earth’.

From start to finish the map changes from an accurate vision of the stars above to an abstracted blackness depicting the new ‘heaven’ in the year 2008.

This is the fifth volume of the Vancouver Special series of artists’ books, edited by Kathy Slade and Christoph Keller, and published in collaboration with Galleria Franco Noero, Torino, and the Charles H. Scott Gallery/Emily Carr Institute, Vancouver.