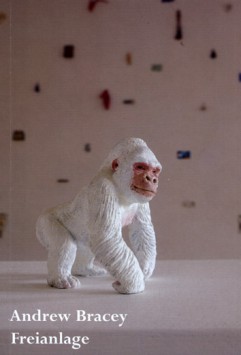 Freianlage, a term derived from zoology meaning ‘free enclosure’, refers to a recent body of work, but also acts as a summary for current concerns of Bracey’s painting practice.

Judith Palmer’s insightful essay introduces a range of the artist’s pieces including Healthy Snacks, Clout and Freianlage and shows how seemingly diverse works overlap and inform one another. Chris Clarke examines in detail Frames, a new un-exhibited series of works in his essay, while an interview with Sally Lai further explores several aspects of Bracey’s practice. Dave Beech and Richard Morris use two motifs within Bracey’s artwork (choice and cinema) to act as a starting point for their contextual essays.

This publication has grown out of the solo exhibition Freianlage which was first shown at firstsite, Colchester in 2006 and then toured to Transition Gallery, London and Wolverhampton Art Gallery in 2007.