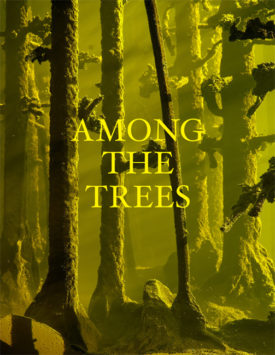 Coinciding with the 50th anniversary of Earth Day, an event widely credited as launching the modern environmental movement, Among the Trees features the work of over 30 international artists, surveying a remarkably expansive terrain.

Beginning with works from the late 1960s the book invites us to consider trees as symbols and living organisms that have shaped human civilisation, and to celebrate their enduring resonance as a source of inspiration for some of the most compelling artists of our time.

Among the Trees focusses on artists who challenge the traditional conventions of landscape representation, and whose work communicates a social and environmental awareness. At a moment when the destruction of the world’s forests is accelerating at a record pace, a number of works included will reflect on the precarious future of trees in many parts of the world.

The book includes a curatorial overview by Hayward Gallery Director Ralph Rugoff, an essay exploring how artists have historically engaged with the representation of trees by critic Jeffrey Kastner, an illustrated history of the tree as a symbolic form by philosopher Matteo Pasquinelli and individual texts on each of the featured artists.

Published on the occasion of the exhibition, Among The Trees at Hayward Gallery, London (4 March – 17 May 2020).

£24.99
Buy now
(Your order will be fulfilled by NBN International)