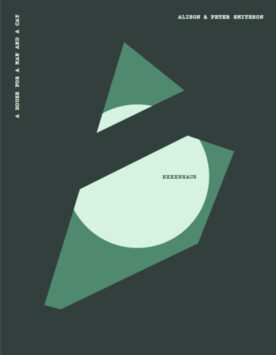 It all began with a letter in May 1984, signed by a tom-cat in Bad Karlshafen, addressed to another tom-cat in London.

In the letter, the cat known as Sir Karl, writing on behalf of his butler Axel Bruchhauser, commissioned Snuff – the cat belonging to architects Alison and Peter Smithson – to construct two lookouts for his ‘Hexenhaus’ (‘Witch’s House’).

The letter marked the start of a fateful collaboration between the designer and TECTA factory owner, Axel Bruchhauser and the Smithsons, the prelude to permanent alterations to the Hexenhaus – itself a poetic construct of lattices and built-fabrics.

“I told Alison I needed a new door, a place where I could just enjoy the views or sit when the rain is coming.” – Axel Bruchhauser

‘The porch [is] an exemplar of a method by which a small physical change – a layering-over of air adhered to an existing fabric – can bring about a delicate tuning of the relationship of persons with place. “ – Alison Smithson

Step by step, the house was expanded and opened to admit the light as well the trees (oaks and birches hundreds of years old) which became part of the interior.

The Hexenhaus is a testament to the early, radical style of the Smithsons, to the corrective and anti-aesthetic character of their finest designs – and at the same time, a monument to the professional work of influential architects themselves.