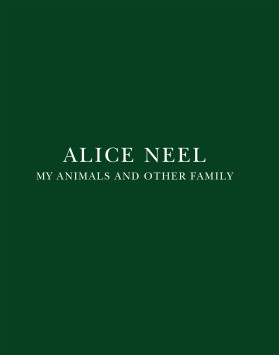 My Animals and Other Family was published to accompany the first solo exhibition of the late artist Alice Neel at Victoria Miro in autumn 2014.

One of the foremost twentieth-century American portraitists, Neel produced work that is intimate, casual, personal and direct. A keen observer of life, in addition to her penetrating studies of people, she focused on her surroundings, whether still life, landscape or impromptu vignette.

Within her family life, animals – especially cats and dogs – were a constant presence. Throughout her career from the 1930s until her death in 1984, we find fascinating examples of works that include or focus on animals.

This publication features paintings and drawings in which the artist captures their character and spirit. Neel’s animals can be seen as human companions, but equally as characters in their own right.