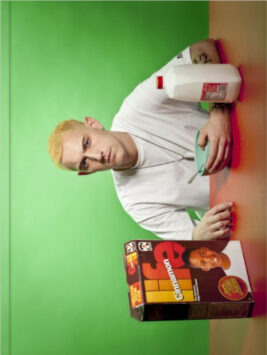 From Detroit to Cologne, from an artist-run space to a major international museum, Eminem trails Da Corte’s work through his thirties, reappearing, evolving alongside America, explaining more of himself each time.

Eminem’s place in culture and his role in Da Corte’s practice, as well as the larger story of American identity, is explored through recent and commissioned essays by Hilton Als, Charlie Fox, William Pym, Martine Syms and Moritz Wesseler.

TRUE LIFE is both an uncompromising reference book and a work of total fantasy, providing a key angle of approach to a vital American practice in the 21st century.