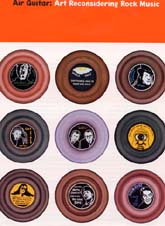 Air Guitar explores the relationship between art and rock music from the perspective of the artist as rock music fan. Since the 1970s, rock music has provided an enduring frame of reference for a generation of visual artists. For many of the artists exhibiting in Air Guitar rock music is a constant source of inspiration for their work, for others, it is the subtle influence that underpins their practice. Published to coincide with the exhibition of the same name at Milton Keynes Gallery (12 July – 1 September 2002) touring to Cornerhouse, Manchester (21 September – 3 November 2002), Angel Row, Nottingham (11 January – 1 March 2003), Tullie House, Carlisle (22 March – 18 May 2003).