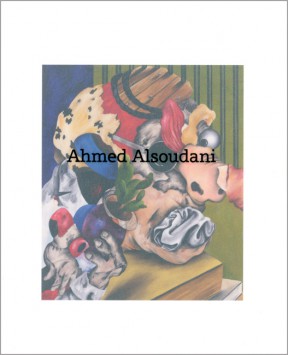 This catalogue features works from the first solo show in Britain by acclaimed Iraqi-born artist Ahmed Alsoudani. In this new series of paintings, Alsoudani continues his complex exploration of war and conflict, its physical atrocities and psychological consequences.

Featuring deformed, almost bestial, figures twisting in vivid and surreal landscapes, these tableaux are often laced with a barbed or morbid humour in the manner of artists such as Francisco Goya and Max Beckmann among others.

Imagery of devastation and violence abounds, with figures depicted at the moment of a dramatic transition –through fear or agony – from the human to the grotesque.

While Alsoudani acknowledges the influence of many artists on his work – from Caravaggio to Carroll Dunham – he has at the same time developed his own unique pictorial language, one based on his personal experiences of growing up in Baghdad under Saddam Hussein’s regime during the first Gulf War and of the more recent Iraq conflict.

Published on the occasion of the exhibition at Haunch of Venison, London, 14 October – 26 November 2011.