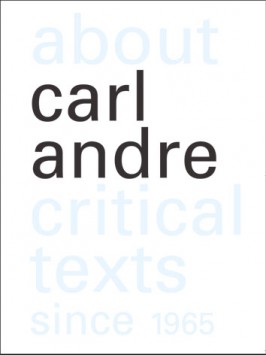 Carl Andre is one of the most significant and influential artists of his generation. Alongside contemporaries such as Robert Morris and Donald Judd, his radically minimalist sculpture and poetry has fundamentally shifted the definitions and boundaries of art.

Spanning four decades, this book charts the gradual evolution of consensus about the meaning of his art.

The most significant essays and exhibition reviews have been collated into one volume, including texts written by some of the most influential art historians and critics: Clement Greenberg, Charles Harrison, Donald Kuspit, Lucy R. Lippard, Robert C. Morgan, Barbara Rose and Roberta Smith.

Some essays appear here in English for the first time. This volume is an indispensable anthology on one of the central figures of Minimalism.