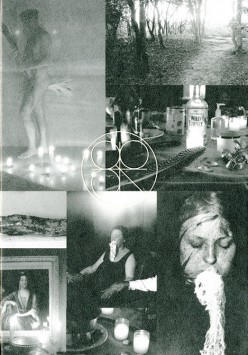 AA Bronson, the New York-based artist best known for his 25 years with the artists’ collective General Idea, has spent a lifetime queering the cultural world. Here he joins up with Toronto-based artist and academic Peter Hobbs to spin a tale in images and words of five performances, all titled Invocation of the Queer Spirits.

From 2008 to 2010 Bronson and Hobbs brought together small groups of men – in Banff, New Orleans, Winnipeg, Manhattan, and Fire Island – in a secret group ritual that was different every time and yet always the same.

Invoking the ‘queer’ and marginalized histories of each site, the men performed something that Bronson has characterized as ‘a hybrid between group therapy, ceremonial magic, a séance, a circle jerk, and a quilting bee.’

This book explores each site in five chapters of photographic images, primarily by AA Bronson, together with a brilliant and often humorous reflection on queer animals, forest rangers, shamanism, and park sex by Peter Hobbs. A group of drawings by Chicago artist Elijah Bergher completes the volume.