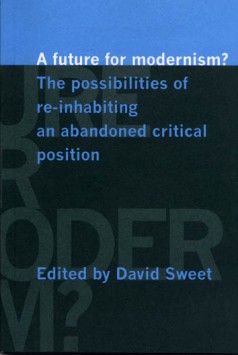 This book contains papers given at the conference A Future For Modernism held at the APT Gallery, Deptford, London in March 2006.

The starting point of the conference was the thought that the type of art criticism, which emerged in the sixties, associated first with Clement Greenberg and then Michael Fried, may be worth re-evaluating. It came to be identified with ‘High Modernism’, a cultural moment when their critical approach, which combined the long standing threads of modernism and formalism, encountered works by Stella, Noland and Caro, whose non-figurative painting and sculpture was free of the metaphysical claims made on behalf of the previous generation of abstract artists.

It’s unlikely these historical conditions will recur. However, there may still be an ongoing role for the kind of criticism that privileges formal concerns. The virtual disappearance of the work of the High Modernist period from British galleries and museums, together with the triumph of other schools of criticism, which regard such art as limited, may be signs that the abandoned artistic position is uninhabitable. On the other hand, in a pluralist, contemporary visual art culture, an adapted type of modernism, one less tempted by hegemonic ambition, may have something important to add to our current range of critical strategies.

This could be ‘low modernism’, an art and criticism, emphasising material and formal qualities, in the context of a history of medium-specificity. 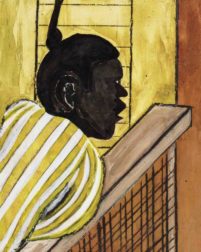