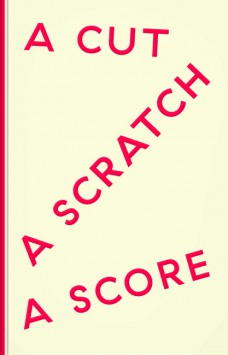 This book is a set of reflections and annotations on A CUT A SCRATCH A SCORE: A Comic Opera in Three Parts, a performance and exhibition project by preeminent British sculptor Bruce McLean and collaborators David Barnett and Sam Belinfante at Cooper Gallery, Duncan of Jordanstone College of Art and Design in Dundee (October 2011 – March 2012) curated by Sophia Yadong Hao.

This publication appropriates Alain Badiou’s philosophy of the ‘event’ as a curatorial proposition that situates exhibition making as a focal point for the unanticipated, the ephemeral and contingent production of knowledge.

Evolving from material generated throughout the project, including artists’ sketches, working notes, transcripts of Salons, librettos, and reflexive texts by three writers in residence during the project, this book is an extended paratext with commissioned essays by leading philosophers and writers including Levi R. Bryant, Lisa Le Feuvre, Robin McKay and Christopher Townsend.